Outdoor positioning for the IoT world

Posted on 26.8.2019 by Grigorios Anagnostopoulos

How can I get an estimate of my position using a mobile device? The answer to this question would be quite complex a few decades ago. On the other hand, the spontaneous answer of most people nowadays would be “using the GPS on my phone” (or on some other mobile device). The use of GPS and other satellite systems, such as the European Galileo, the Russian GLONASS, or China’s BeiDou, have familiarized the broad public with the concept of outdoor positioning, which is often considered a solved problem.

During the last few years though, the emergence of Internet of Things (IoT) technologies is bringing to the market and to our daily lives a plethora of small, low power devices. These devices operate with a very low power consumption, which sets the integration and usage of a GPS chipset impractical. Thus, other ways of localizing these devices are needed.

IoT devices are commonly used to create Low-Power Wide-Area Networks (LPWAN) that allow long range communication at a low bit rate among connected objects. These devices transmit signals which are received by a mesh of gateways. Each signal is modulated as a self-contained package which includes a message that is dependent on the application. Regardless of the application though, each gateway receiving a message can report a number of measurements that can facilitate the estimation of the position of the mobile devices. Measurements such as the Received Signal Strength Indicator (RSSI), and the Time Difference of Arrival (TDoA) of the same signal between two gateways, are some of the measurement types that can be used for localization.

A common approach of solving such a problem is to use a geometric solution of a ranging method, such as the commonly known trilateration. For instance, for each measurement of RSSI a distance estimate can be inferred based on a propagation model. This means that gateways that are close to the mobile device are expected to receive a higher signal strength than those gateways that are further away. Having estimates of the distance of the mobile device from several gateways allows us to use a multilateration method to infer a position estimate. 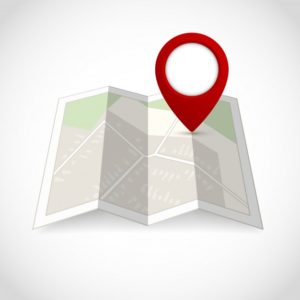 Ranging methods assume knowledge of the locations of the gateways and only require a propagation model to be able to produce position estimates. Nevertheless, in their common form, they assume a propagation in a uniform area with Line-of-Sight (LoS) without any obstacles. It is understandable that is it very hard for this assumptions to hold, especially in urban areas. Buildings, vehicles, trees, hills and other static or dynamic obstacles can affect the signal’s propagation. In other words, ranging methods, in their basic form, cannot capture the particularities of the environment in which they are used. This has an immediate impact on the level of accuracy that these methods can achieve.

This problem has been also observed by the indoor positioning research community. An alternative to the ranging techniques, which has been broadly used by the indoor positioning community, is the fingerprinting approach. This approach requires the creation of a radio map, which is a big set of measurements of signals of interest (such as the RSSI) at a grid of known locations. The signal receptions characterizing each location are called fingerprints. This map of fingerprints is used to solve a supervised task: a model is created where the features are the signal measurements, the targets are the locations where the measurements are taken, and the prediction concerns the unknown location of a new signal reception. The collection of such a dataset is a tedious task since the person creating it must physically attend each location, report the location to the database and collect the signals characterizing it. Even though it requires considerable effort, it is a feasible task to perform in an indoor setting. Moreover, it has the advantage of lower localization error comparing to the ranging methods. 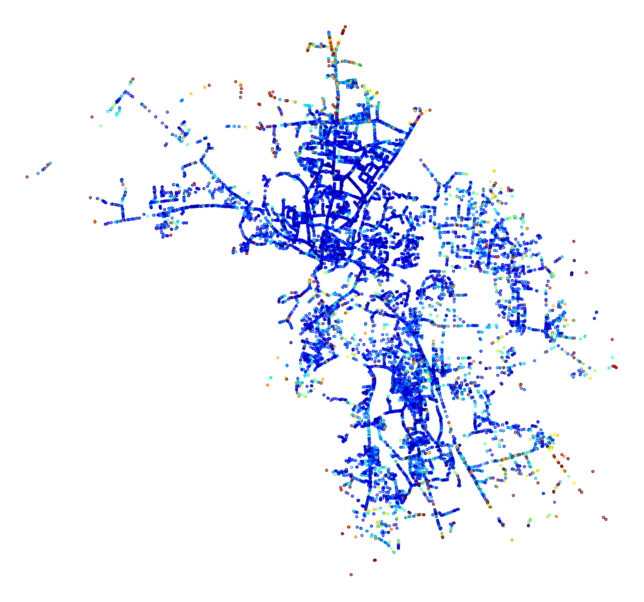 How could these methods be used in an outdoor setting though? This is a relevant question, since a manual collection of the fingerprints in big urban areas is a pharaonic task. A common way that this has been addressed in the outdoor world is by using vehicles that span the cities regularly, like taxis, buses, post office vehicles, etc. These vehicles are equipped with an IoT device used for the signal exchange, and a GPS device used to report the ground truth location (well… an estimate of it, to be precise). As these vehicles span the area, a big volume of data is collected which can be used to the train a model. This model will be able to predict the location of IoT devices based on future receptions of signals from them. 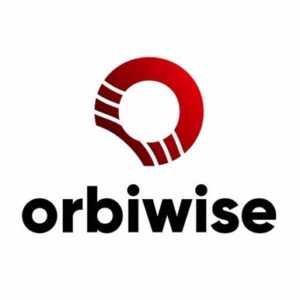 In the Data Mining and Machine Learning group of HEG, we are in close collaboration with the Swiss based company Orbiwise [1], which specialises in developing advanced technologies for IoT providers maximizing the performance of their service. More specifically, Orbiwise specialises on the LoRaWAN standard. Our collaboration has taken the form of an Innosuisse project called OrbiLoc, which aims to further improve the localization accuracy achieved by the current solution. In our common work, we have observed an improvement of the localization accuracy at the level of ~50% when comparing our proposed Machine Learning models to the common trilateration approach.

Moreover, we participate in the recently popularised public debate of the research community, where the level of achievable accuracy of different IoT technologies with various measurements types is studied. We have recently published two works, in which publicly available datasets of RSSI measurements over LPWA Networks are used. In these works, we perform a comparison of different machine learning techniques, and we discuss the preprocessing and hyperparameter tuning steps optimizing the system’s performance in terms of minimizing the localization error. For further details you can refer to the preprints of these two works made available here [2] [3].

If you are interested in IoT Localization, or if simply this use of machine learning seems exciting to you, stay tuned! Or even better, feel free to contact our team for a relevant discussion!